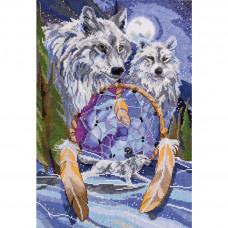 The leather set includes: white canvas, handy organizer with natural 100% natural floss, needles for embroidery, volume and initial instructions, as well as the black-and-white scheme itself with some color accents.

I will catch you again from the nightmarish nightmares. These talismans came to us from ancient Indians. It was important for them that the wolves were guides to the sweating world, keepers of dreams. The Indians believed that at the same time the vitya could turn the dying man from the sweating world. And in the center of the dream catcher, there was an image of a forest animal.